OnePlus has officially released the OnePlus 9 which is the successor to the OnePlus 8 that was launched last year.  The latest Oneplus 9 smartphone adds both a flagship standard of sleeky design and solid performance. When compared with last year’s Oneplus 8, Oneplus has greatly improved the camera, screen, and battery quality of the Oneplus 9. The price of Oneplus 9 in Nigeria will be around N330,000 – N350,000.

It has amazing features that will please most Android users. Some of these amazing features are super-fast performance, powerful battery, which all add up to a very nice phone.  Yes, of course, it lacks some of the more glamourous features of phones like the Samsung Galaxy S21 Ultra or the iPhone 12 Pro Max, but when you look at the affordable price which starts from $729, it’s a fantastic phone to pick if you dont want to spend a thousand dollars.

Since its inception, the Chinese firm has attempted to manufacture phones that can compete with flagship devices from Samsung, Apple, and Huawei. The OnePlus 9 came to the best level they’ve ever gotten, but still, it came up short in contrast to those aforementioned brands.

Truth must be told, the OnePlus 9 is one of the most awaited Android releases of 2021. It is the company’s next effort to bring the best quality device. It comes with an improved chipset, a larger battery, a 120Hz refresh rate, a new triple camera setup, and some new camera modes. Base on the spec sheet, the OnePlus 9 appears to be a fantastic device, but does it conform to its lofty specifications? Let’s find out below.

The latest OnePlus 9 5G was released at a price of $729.00. Winter Mist, Arctic Sky, and Astral Black color options are available for the handset. There are no details as at the time of writing this post as to whether or not this phone will be released in Nigeria. However, we expect it to be available by April with a price range of N350,000 – N370,000. 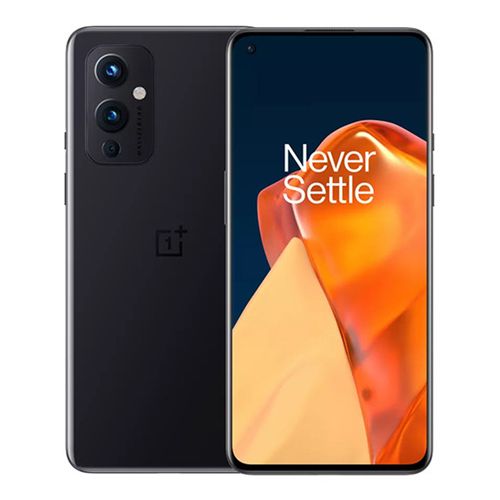 The OnePlus 9 has a plastic frame, while the OnePlus 8 has an aluminum frame. Just like I said earlier the phone’s back is made of shiny glass. It appears to be made of metal at first glance, and it isn’t immediately obvious when you hold the device. On the plus side, you won’t have the unnatural-looking antenna lines that come with aluminum frames. Some people, on the other hand, like their flagship devices to be made of premium materials, and if you’re one of them, this plastic design may not be for you.

The OnePlus 9 weighs 183g and this makes it lighter and more convenient to carry than the OnePlus 8, all thanks to its thinner body. Astral Black, Winter Mist purple, and Arctic Sky blue are the three color choices for the handset. The reflective glass on the back of the phone looks elegant and sleek, but it is susceptible to fingerprint stains.

An alert slider on the right side of the frame lets you easily switch between Silent, Vibration, and Ring modes. The power button is below that, and the volume controls are on the left edge. The OnePlus 9 doesn’t have a MicroSD card slot, and it has a USB-C port on the bottom. There’s an in-display fingerprint sensor for security and it works very fast.

The screen is flat, 6.55-inch FHD+ AMOLED with a resolution of 2400 x 1080 and a refresh rate of 120Hz which is absolutely good for smooth scrolling and gaming. It can produce up to 1,100 nits maximum brightness and supports the sRGB and P3 color gamuts. The phone’s color accuracy is said to be comparable to or even better than some of the highest-rated monitors on the market. When reading an e-book, you can use Comfort Tone to have the display automatically adjust the color temperature to best fit your surroundings, making it far clearer on the eyes.

The OnePlus 9 lacks a couple of functionality that is only available on the OnePlus 9 Pro like the Low-temperature polycrystalline oxide (LTPO) display backplate that allows the phone to adjust the refresh rate depending on what you’re doing, bringing it down for mild tasks like scrolling through images to save battery life and bringing it up for demanding tasks like gaming. This feature is similar to what we’ve seen in Samsung phones.

The primary lens has been modified to work with the camera’s advanced Hasselblad Pro shooting mode, which allows users to take huge 12-bit RAW images.

You’ll note that there isn’t a telephoto lens. This is because the OnePlus 9 camera’s zoom capabilities are not its selling points, instead OnePlus has chosen to emphasize the camera’s ultra-wide sensor and color accuracy and the major selling points.

The OnePlus 9 and 9 Pro are among the first devices to feature Qualcomm’s latest flagship chipset, which is manufactured using the 5nm fabrication process. Both devices are operated by the Snapdragon 888 Mobile Platform, which includes an X60 5G modem.

The Snapdragon 888 is an eight-core processor that outperforms the Snapdragon 865 by up to 25 percent with better performance. It has one “Prime Core” based on the ARM Cortex-X1 architecture with a clock speed of up to 2.84 GHz is included. Three additional performance cores, based on the A78, run at 2.42 GHz. In addition, four energy-saving cores based on the ARM Cortex-A55 architecture and clocked at up to 1.8 GHz have been integrated. For more info about the chipset, check out HERE

The Adreno 660 GPU is in charge of graphics, and it offers a 35 percent performance boost over the Adreno 650.

The OnePlus 9 will come in two configurations. We’ve 8 GB of LPDDR5 RAM and 128GB of storage and a12GB RAM and 256GB of internal storage.

Sincerely, I suggest you choose the bigger configuration, as it’s extremely easy to occupy the 128GB internal storage limit with HDR/4K video or apps.

In real-world testing, I found the phone to be completely capable of handling any task I threw at it. Demanding games like PUBG Mobile and Call of Duty: Mobile ran flawlessly at their maximum graphical settings.

You may be interested in: OnePlus 8 Price in Nigeria & Full Details

The included LPDDR5 RAM, which OnePlus says provides 1.5x performance over past models, also enhances performance according to OnePlus. The OnePlus 9 lets you keep 25 percent more apps open in the background than before, thanks to OxygenOS 11 optimizations like Turbo Boost 3.0. According to OnePlus, this is likely because the RAM is compressed, making the data on the processor smaller, and Virtual RAM is used to turn idle phone storage into temporary RAM, allowing you more to work with when you really need it.

While there are other flagship phones with larger batteries, the OnePlus 9 has a 4,500mAh battery which I believe that’ll get you throughout the day. One of the benefits of the OnePlus 9 is its charging speeds.

If you happen to completely utilize the battery and run out in the evening, the OnePlus 9 has the same 65-watt super-fast charging tech as the Pro variant.  It’s incredible, and it can fill it up from zero to 100% in less than 40 minutes. That’s outstandingly fast, and it’s ideal for those times when you’ve forgotten to power it and just need to give it a quick boost before going out for school or work.

That being said, the device also supports fast wireless charging of up to 15W and this can easily charge your phone from 0 to 100% in less than an hour.

I was expecting the OnePlus 9 to have a smaller processor than the Pro variant, but it comes with the same Qualcomm Snapdragon 888 processor, which is a beast and the latest 5nm flagship chipset. Heavy gaming and multitasking can easily be handled by this chipset. To be honest, so far there is no activity that would make it slow down.

The OnePlus 9 is being marketed as the phone for the majority of people who want a high-end phone with an affordable price tag. Meanwhile, the OnePlus 9 hasn’t undergone any substantial improvements, which isn’t entirely a problem. The display, the new camera setup, the performance, and the battery life are all impressive. However, the reason I believe you will choose the OnePlus 9 is because of the improved cameras and cleaner software. If you’re upgrading from the OnePlus 7 or 8, the OnePlus 9 offers a significant change in the camera setup. Also, the performance needs a mention as it packs the latest Snapdragon 888 which I believe will handle the most demanding activities.

Buy it for these 3 major reasons

If you’re looking for a phone with high-end features at a low cost then the OnePlus 9 is the best Android phone you can get below $750.

If You’re looking for a perfect photography experience for a reasonable price then the OnePlus 9 is worth considering at this price point.

You should not buy if

While the base model has 128GB of storage and the bigger model has 256GB, with no support for an SD card. Dont buy if you are the kind of person that likes recording 4K videos or installing a lot of apps.