Before the coronavirus crisis, Samsung managed to launch the S20, S20 Plus, and S20 Ultra, the outcome was really good but the company’s second-quarter sales were hit hard by the pandemic. Nevertheless, Samsung released its second flagship of the year-the Galaxy Note 20 series with the hope of having a strong third and fourth quarter of 2020.

The Samsung Galaxy Note 20 was released on August 5, at the company’s online Unpacked event alongside Galaxy Note 20 Ultra and a number of other products.

The Samsung Galaxy Note 20 price in Nigeria starts from N350,000. Despite its differences with the Note 20 Ultra, it is not priced remarkably lower.

Lets find out the price Note 20 in Nigeria.

It is already available for sale on Samsung stores and all retail shops. Samsung Galaxy Note 20 price in Nigeria will start from ~ N350,000. 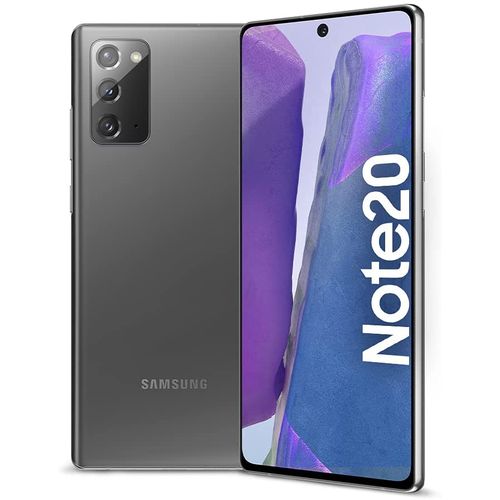 The Note Ultra comes with a 6.7 in FHD+ Infinity-O flat screen which is bigger than Note 10 and it looks pretty impressive than its predecessor. The display is HDR10+ certified and comes with the traditional 60hz. The display has a screen resolution of 2,088 x 1,440 pixels 494ppi density.

The Galaxy Note 20 has the iconic boxy shape and because of the stainless steel frame and plastic body that feels like a ceramic, it should be durable. It is quite mind-boggling why Samsung opt for a plastic body for a flagship device. Come on! this is 2020 and most devices that are not even close to the price of Note 20 are using glass over plastic. Who knows whether Samsung is indirectly telling consumers to opt for Note 20 Ultra since the prices are not much of a difference too.

The three rear cameras are housed in a rectangular black frame protruding from the rear, as is the latest trend. This implies that when you put it on a desk, the handset doesn’t lie absolutely flat on its back.

All physical buttons are mounted on the right frame as one might anticipate. At the bottom, next to the speaker, is a USB Type-C. There is no 3.5 mm headphone jack or a slot for a microSD card.

The S Pen stylus is shifted from the right side of the bottom edge to the left side. Apart from that, Samsung has improved its S Pen stylus by adding new gestures and enhancing the stylus’ accuracy and sensitivity.

With the number of lenses and megapixels increasing, camera technology has been the main competition for flagship phones, in fact, every phone!. Note 20 is not left behind for this trend.

The Note 20 has a 2.73GHz Exynos 990 Octa-core processor-a upgrade from the 9825 version in Note 10. One thing you should know is that, when it comes to the processor choices, Samsung is very controversial. The Exynos 990 is the same processor found in Galaxy S20 in Asia and most parts of the world. So, Samsung is still providing Note 20 with Exynos 990 to those regions. However, Note 10 model in the United States will be is equipped with Qualcomm SM8250 Snapdragon 865+ processor.

Still, on the performance, Note 10 will be available in two variants, a 5G-enabled (US) and a non-5G model. The device has other interesting features like IP68 water-resistance and support for Samsung DeX.

As for the battery, it is powered by a  4,300mAh battery which can reach 100 percent charge in an hour. Thanks to the 25W fast charger that is included.  15 W Fast Qi/PMA wireless charging and 9W Reverse wireless charging is also supported by the Note 10.

Back then, Samsung releases only one Note device but things changed last year with the introduction of a smaller version in the series. Last year, the smaller version of the Note 10 series has not gained much prominence and this same situation is happening to Note 20. Is it because of the plastic cover, flat screen, and most importantly the price?

Nevertheless, Samsung’s Note series is designed for a particular category of consumers and the S Pen stylus is one of the major reasons. Note 20 is provided by the S Pen as an additional means to seamlessly control the device. PS.  Samsung has introduced some fresh gestures to the S Pen and also improved its sensitivity. So, the whole essence of buying any of the Note series and not the S series is mostly because of the S Pen. If you are also interested in the S Pen and good performance, then Note 10 is here for you.