Tecno has really been releasing new phones at a rapid pace. New ones in the Spark and Camon series have recently been released, and there is now a fresh phone dubbed the Tecno Camon 17 Pro which is the biggest variant of the Camon 17 series that was released in Nigeria just last week. Being in the budget segment, the Tecno Camon 17 Pro has some impressive specs at least on paper. A MediaTek Helio G95 processor, 8GB of RAM, a display with a refresh rate of 90Hz, a 64 MP quad-camera setup, and an asking price of just N155k. Umm, do any of these specs mean good quality for such a price? To find out, just read the complete review below.

From the front, the Tecno Camon 17 Pro resembles most 2021 smartphones, with a huge display and a hole-punch camera (64 MP) in the top center. We’ve luckily moved on from the days of the massive notch or dew-drop and I think hole-punch is a decent compromise before under-display cameras are perfected.

Tecno Camon 17 Pro has some reasonable specs, particularly for a device that costs less than $300, but when compared to closely related devices from Xiaomi and RealMe, the specifications aren’t all that surprising, except for the screen refresh rate and camera, which are much better than we can expect for such a reasonable price.

With a shiny unboxing experience, the Tecno Camon 17 Pro gives away its design style right away. Users will also receive earphones, a USB Type-C cable, and a 25W fast-charging charger in addition to the Camon 17 Pro. There’s really nothing particularly exciting here, but in an era where headphones and chargers are no longer optional additions, it’s great to see them included.

The Tecno Camon 17 Pro is already available for sale in Tecno’s stores across Nigeria. It is priced at N155,000. 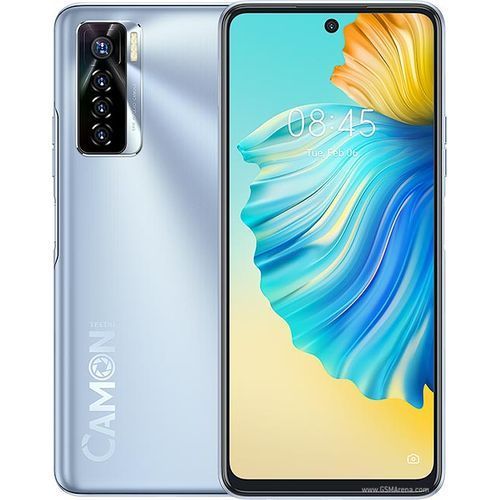 First and foremost, the Tecno Camon 17 Pro is a reasonably large phone, owing to its large 6.8-inch screen. There’s a relatively thick chin on the handset, which makes it much bigger than it already appears, and a thick bezel across it, but only in relation to flagship phones.

Considering the price, then that should come as no surprise that the body and frame are made of plastic, with a remarkable but cheap-looking design (My humble opinion).

It features a huge 6.8-inch FHD IPS LCD display with a resolution of 2460 x 1080px, pixel density of 395ppi, and a max brightness of 500 nits. Its single front camera is housed in a punch-hole on the top-center, which isn’t annoying in the least.

The display has a 90Hz refresh rate which is often important for a silky experience. It may not be as good as an AMOLED display, but it does have a noticeably smoother experience. It also has a decent brightness level. In Outdoor with full sunlight, the display can still be seen clearly at maximum brightness.

The phone has an integrated fingerprint reader on the power button which is placed on the right-hand side of the device. Because of the price, there is no under-the-screen scanner or even IP rating. A volume rocker is also placed on the right-hand side. The SIM tray is the only thing available on the left side. The Camon 17 Pro can use dual SIM cards as well as a separate microSD card at the same time. The 3.5mm audio jack, microphone, USB Type-C charging port, and single speaker grille are all located on the device’s bottom.

You may be interested in: Tecno Camon 17 price in Nigeria, details and Full specs

The Tecno Camon 17 Pro is a decent budget phone with good features, but the camera is where it really attracts users. Tecno has done everything possible to include a camera module that competes not with other budget phones, but with midrange phones costing nearly twice its price.

The camera has a variety of settings to ensure you get a quality picture, whether you’d like to take a close-up or a bokeh-styled picture with the background blurred – both of which are available, along with an AI mode for the best possible shots.

A 64MP main sensor, an 8MP for ultrawide, a 2MP monochrome lens, and another 2MP lens for depth sensing make up the quad-cam configuration. A LED flash is located beside the ultrawide lens. Tecno decided to balance a high-resolution 64MP main camera with an ultra-wide-angle 8MP camera for pictures.

The camera software is close to that found on most Android phones, so navigating around shouldn’t really be difficult. Bult-in filters, magic pixel, short video, beauty, bokeh, emojis, super night, 4k videos are all included.

Under good lighting conditions, shots from the rear camera always look well-detailed and display good colors. But, since they can be overexposed, you might want to take more pictures. Its standard mode creates a pleasant depth effect, resulting in images that look professional. And while there isn’t much of a difference when using the 64MP lens, you should expect better quality if you really need to use it.

Shooting with the Camon 17 Pro in low light isn’t recommended because we always get blurry images, but this should satisfy when you consider the price. Using the super night mode, on the other hand, will make night shots appear clearer and more accurate.

The Tecno Camon 17 Pro is buffed a little bit when compared with its predecessor in terms of actual performance. It’s powered by a MediaTek Helio G95 Octa-core CPU with 86GB of RAM and 256GB of internal storage

A 5,000mAh battery powers the Camon 17 Pro. Even in a high-end phone like the OnePlus 9 or Galaxy S20 with a 120Hz display, that would still be enough. So such a battery on a budget phone with far less demanding hardware would last you long. And if you run out of battery, you can easily juice it up with the 25W fast charger.

When it comes to battery life, however, volume isn’t everything. The software also contributes to decent endurance.

The software interface on the Camon 17 Pro would not be to everyone’s liking. It works smoothly for the most part, but there is a lot of bloatware and some annoying ads. To be honest, even Samsung and Xiaomi’s more expensive phones have been caught sending ads to users, so I guess ads are appropriate on a budget smartphone.

There are also several built-in tech tricks, such as the WhatsApp video beautifier, which is a beauty filter that can be added to the user during WhatsApp video calls, just as the name suggests. All in all, it’s a fairly heavy software skin, but it’s user-friendly to me.

The Tecno Camon 17 Pro comes with some exciting features that helps in its success. The MediaTek Helio G95 is a good processor with 8GB of RAM. Even the 90Hz display contributes to the overall smoothness of the user interface.

Meanwhile, the phone has a couple of flaws that could make potential buyers think long and hard. The first issue is the software; there really is a bunch of stock apps preinstalled, and some send out obtrusive ads, which is annoying. The battery life is very adequate, but if you are a heavy user who likes to game and watch Netflix often, you will need to charge it often.

The Camon 17 Pro might be a good choice if you’re looking for a low-cost phone that does everything you need and has a good camera and good chipset that can handle moderate tasks. I would recommend the device genuinely if Tecno provided a version without preinstalled apps, but even with the bloat, it is a decent device when you consider the price.

If you’re looking for a phone with better cameras and battery life at this price point, then consider this device.

Despite the Covid-19 pandemic, Smartphone Manufacturers are able to unveil new phones via Livestream. Here we’ve got all…