The Tecno Camon 18 Premier is one of the best low-cost Smartphones that offers premium features so far. This time, it appears that Tecno is working on something even bigger and more fascinating.

The smartphone, which has a 6.7-inch screen and a 1080p resolution is already available for sale. Basically, it’s the best smartphone in the Camon series, as well as one of the best budget phones on the market right now.

The phone’s camera capabilities are one of its main selling points and believe me, there is a reason why it is called “Camon Premiere”! It has a Gimbal camera, which is a technology that became popular last year with certain smartphones. The phone also has a digital 60X zoom capability on its telephoto lens, and the primary CMOS sensor is a 64MP sensor. The display is an AMOLED panel and has a refresh rate of 120Hz. And most importantly, the chipset is the latest Helio G96, a gaming-oriented SoC.

With a shiny unboxing experience, the Tecno Camon 18 Premier gives away its design style right away. Users will also receive earphones, a USB Type-C cable, and a 33W fast-charging charger. There’s really nothing particularly exciting here, but in an era where headphones and chargers are no longer optional additions, it’s great to see them included.

The Tecno Camon 18 Premier is already available for sale in Tecno’s stores and retail shops across Nigeria. It is priced around N185,000 – N195,000. 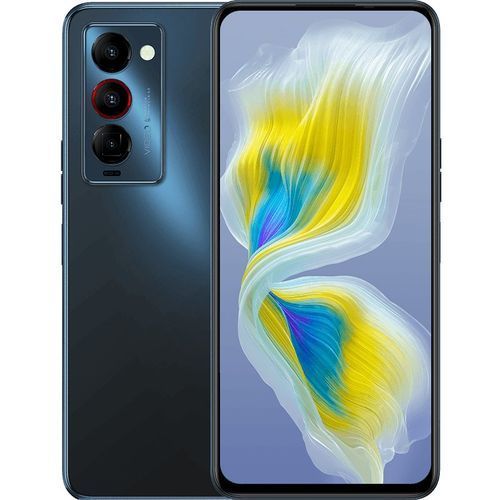 The first thing that will attract your eye is the modern design, which is similar to that of OnePlus and Oppo. TECNO redesigned the Camon 18 completely from its previous generation with a flat design, something that is currently trending with most smartphones. One thing I really liked about this device is its lightweight, with a body thickness of only 8.2mm. The smartphone is large, but it is easy to hold in one hand.

The phone’s front has a massive 6.7-inch flat screen with a punch hole in the center. It has small bezels that are a little thicker on the bottom. On the top bezel, there is the main head speaker, which is mounted on a wide, thin tray. To protect the screen from daily smudges, a thin plastic film has been implemented.

The frame is nearly flat, with a slight curve near the two panels. The external audio canceling input is on top, the sim tray is on the left, and the 3.5 mm audio jack port, the second external audio canceling input, a USB-C port, and the main speaker’s tray are placed on the bottom. The volume controls and the power button, which also functions as a fingerprint reader, are located on the right side.

The rare camera design, which is similar to the design found in OnePlus devices is what distinguishes it from other smartphones in its category and it is appealing to the eyes. The camera bump is not big and it is a few millimeters tall, with three circular lenses of the same size. The middle lens has a red ring, while the other two are completely black. The lower one is square on the inside, indicating that it contains a telescopic telephoto lens.

The Tecno Camon 18 Premier boasts a solid design and a 6.7-inch AMOLED screen. AMOLED technology provides excellent contrast and a remarkably wide viewing angle. In addition, the screen has an FHD+ resolution and a maximum brightness of 550 nits, which is not adequate for outdoor use. Another big plus is the 120 Hz refresh rate, which makes scrolling through apps seamlessly. In terms of display quality, it is fairly sharp and Tecno deserves credit for not cutting corners on quality materials given the target market.

It has a simple interface with bright colors, and it runs on Tecno’s HiOS interface, which offers a variety of themes, fonts, and other display aspects that we’ll get into subsequently when we discuss the software.

A larger screen for Netflix means a larger view, as well as the option to share it with others. Also when it comes to reading, a bigger display allows you to read and work more than on a smaller display. The two criticism of the display is the low pixel density and the screen could have been better if it is brighter. It will be difficult to see clearly when you are using the phone under bright sunshine. Even at max brightness, it is difficult to read.

The Tecno Camon 18 Premier is a decent phone with good features, but the camera is where it really attracts users. Tecno has done everything possible to include a camera module that competes not with other budget phones, but with premium phones costing nearly twice its price.

The camera has a variety of settings to ensure you get a quality picture, whether you’d like to take a close-up or a bokeh-styled picture with the background blurred – both of which are available, along with an AI mode for the best possible shots.

Because this is the phone’s key selling point, I have no choice but to extensively talk about the cameras’ capabilities. The Tecno Camon 18 Premier, as previously stated, features a 64MP main camera, a 12MP ultra-wide camera, and an 8MP telephoto periscope lens with an f3.5 aperture and 5X optical zoom. It doesn’t have a macro camera, however, the main camera can take close-up shots.

The phone has a 5x optical zoom and a 12x digital zoom, which Tecno refers to as a 60x hyper zoom. One thing to know about digital zoom is that the details of the photo you are taking gradually reduce as you zoom further. As such, I dont recommend zooming beyond 5x on this device since the photos get stains and blurred when you passed that zooming level.

This phone is ideal for any smartphone photographer who wants to take high-quality photos with good color reproduction. The ultra-wide lens has more saturation than the others.

The device does not overuse the color and does not increase the saturation level above what is found in nature. However, there is no additional feature to increase colors. If you’re an old Oppo user who’s hooked with chroma boost, however, you may use Super Night mode even in daytime images to achieve brilliant colors. By the way, there’s a lot more about Super Night mode in this article.

Night images, as well as images taken in low-lighting and artificial light, turned out well. When taking multiple images, the colors rarely became uneven, but the photographs were amazingly detailed. When compared to images taken in normal mode at night, the night mode does bring back the colors. You can’t expect a lot of detail, but the overall picture was ok.

The Portrait mode on the Camon 18 Premier is quite outstanding; the subject boundary mappings are superb, as is the background blurs. For beauty mode, Tecno hasn’t done a wonderful job. It takes out any natural skin textures, overdoes the cosmetics, and makes photographs look quite unnatural.

When Ultra-stable mode is enabled, you can take photos while moving without any distortions.

Even in portrait mode, the 32 MP selfie camera takes good photos. It improves the color tone of selfies while also providing a good focus. The only caveat is that in order to get a good shot, you need adequate lighting conditions.

The Tecno Camon 18 Premier is buffed a little bit when compared with its predecessor in terms of actual performance. It’s powered by a MediaTek Helio G96 Octa-core CPU with 8GB of RAM and 256GB of internal storage.

Even with the intense graphics in Asphalt 9: Legends, you’ll definitely have a smooth game during the races. Graphically demanding games like Genshin Impact and Marvel Future Revolution do perform on this phone, but we got the best frame rates when the graphics settings were set to Low to Medium. We can force it all the way to the limit, but the experience isn’t as sleek, and things fall apart quickly when there’s a lot going on on the screen.

A 4,750mAh battery powers the device. When it comes to battery life, however, volume isn’t everything. The software also contributes to decent endurance.

The software interface on the Camon 17 Premiere would not be to everyone’s liking. It works smoothly for the most part, but there is a lot of bloatware and some annoying ads.

Even done though there is no device without flaws, to be honest, the Tecno Camon 18 Pre has pretty much everything that is needed in the budget segment. The display is excellent, the camera is one of its kind in the budget category, and the gimbal is very welcomed and is one of the excellent ways to stand out.

The Chipset is brand new and game-oriented (Though not for hardcore gaming). The battery is large and charges rapidly. I Think this smartphone should meet the needs of the average user. The design is superb, and the quality is good. Everything is included in the box.

The software is detailed and user-friendly. TECNO must demonstrate here that they are here to stay as a company and show what they are capable of doing. The only way is to provide continuous support and upgrades.